Getting to compete in the SPC is an honor, the conference is loaded with great teams who can compete at a high level at all levels. As a team we have been making great strides over the past few seasons. The conference meet is a great chance to see where we stack up.

The day got started with a strong run from our frosh/soph crew. They finished 3rd overall in a very close battle with Plainfield North (65 points), Yorkville (69 points) and we finished 3rd with 75. Paul DeAvila stepped up in a big way with a 3rd place finish. Mike Forbear who has been steady all season over came a stomach bug to finish 11th place. Aaron Wyckoff put it all out there for the team battling some hip tightness to fight to a 16th place finish. Our final frosh/soph award winner was Cam Mulyk who finished 21st, Cam did not have his A game on Friday but he fought for his teammates. Very proud of the effort of Cam. Alex Rojo ran his best race of the year, when it mattered most. Just 2 seconds off his season best on a course that was very muddy and sloppy. Tanner Torri kept his freshman campaign going strong with a great run. Patrick Kacena rounded out the results for the frosh/soph crew.

The varsity crew was up next. Austin Emrath led the way, finishing 33rd place. Dan Hale stepped up to finish as our second runner at conference and was followed very closely by Ryan Bonomo as our 3rd. Dean Eubanks had a strong run as well, and he moved up in the second half to finish as our 4th. Tommy Adelmann rounded out our scoring as our 5th man, Tommy did not have a great day but fought for his teammates. Colin Graefen ran a solid race in his varsity debut for the season. Kyle Schick rounded out the day for the varsity crew.

The open crew kept it rolling with some very strong performances to end the meet. Jason Matula may have passed as many as 40 people the second half of the race, he ran a big negative split to lead our open crew. Freshman Asher Bradley was next man in. Jack Obman took a risk early and faded, but you learn a lot about yourself when you take a risk, Jack still finished as our 3rd in the open race. Our dynamic freshman duo of Richie Ruane and Michael Kawa were next in. Henry Matson was just 6 seconds off his season best with a very strong race. Dylan Ensworth finished his season with a great run of 19:40, just 5 seconds off his season best and 5 minutes faster than his first race, not bad for an XC rookie. Luke Edmondson was next in, Luke had been sick all week and fought hard to run a strong race at Conference. Another XC rookie was next in, Jonah Almawi who has a very bright future closed his season with a sub 20 minute run. Connor Koukou ran his 2nd best time ever was next in. Aiden Fannin who has turned himself into a very strong runner through commitment and hard work this season finished his season with PR! Diego Herrera was next in with another PR. Diego has been an unbelievable worker this past season and it has paid off with incredible improvement. Josh Kodura was next in with a strong run. Justin Irizarry came in within 7 seconds of his all-time best, Justin is another guy who has worked himself into a very strong runner. Following his brother, new comer Josh Irizarry ran a season best to finish the season. Hunter Porn who has improved in incredible ways in the past year, finished his year with a 21:15, Hunter’s PR from last year was 23:54. Luke Konow just missed a season best by 4 seconds, but given the conditions it was a great run. Nathan Rodriguez ended his season with a PR! Nathan Weyer was next in, battling a terrible headache Nathan has showed more toughness than almost any athlete I have every worked with. Steven Garcia finished out the day for us running within 1 second of his PR, Steven’s first race was 35 minutes and in this race he ran 26:17! 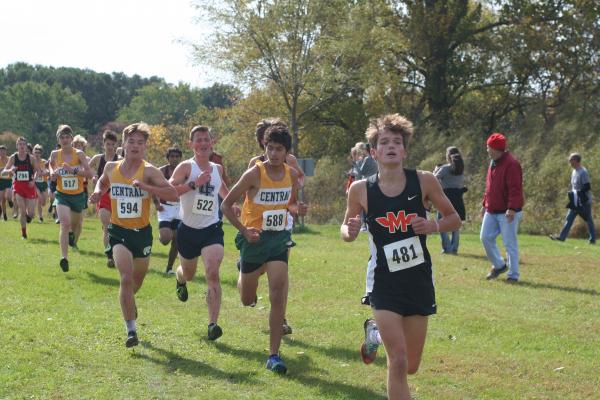 Now on to Regionals next week. We know what needs to be done, but now is the time to accomplish it.